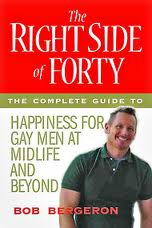 A couble of years ago I read a very sad and surprising story about the death of Bob Bergeron – an upbeat and well-known NYC therapist who committed suicide early in 2012. The piece reminded me of a discussion in one of my classes. We were talking about how many people we know who look genuinely happy and upbeat all the time.

My students all went silent and one dared to say: “Yes, I do, YOU!” Another broke out laughing and added: ”I wanted to say that too, but didn’t dare!” A third said: “I suspect there is always something hiding behind a happy person.” I couldn’t agree more.

Happy on the outside

Jacob Bernstein published on March 30 2012 a heartfelt column in The New York Times, Not waiting to say good bye, about Bob Bergeron, the cheerful and handsome gay therapist who became well known and loved by his clients for his “always upbeat, somewhat less focused on getting to the root of his clients’ feelings than altering behavior patterns that were detrimental to them: therapy from the outside-in.”

Shortly after New Years´ Eve in 2012, Bergeron was found dead in his apartment. He had committed suicide.

It was a shock to everyone who knew him: his family, friends, and clients. He was nearing his professional peak, and nothing in his life indicated any sort of problem.

Read the whole article at VOXXI.COM